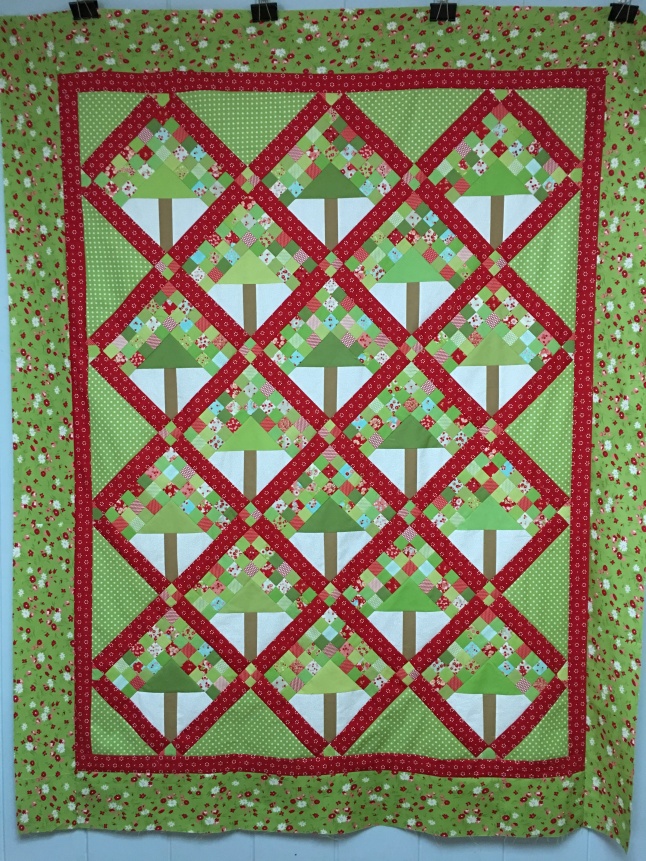 Mrs. Krabappel, voiced by Marcia Wallace, was Bart Simpsons teacher.  She usually wore green and put up with a lot of Bart’s mischief.  This quilt is named after her.  I made it from Bonnie Hunters pattern, “Crab Apples”, in her book, Adventures with Leaders and Enders .

It started out simply enough, I had a bunch of scraps left over from a layer cake I had used to make this quilt below. It’s from the pattern “Lombard Street” by Sassafras Lane Designs.  It was fun to make, paper pieced, and the Bonnie and Camille fabrics were cute with the turquoise. 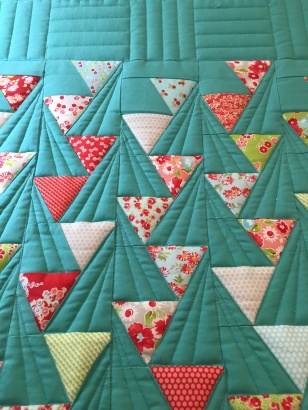 I started cutting up the scraps into 1 ½ ” squares.  Then I added a few green fat quarters that were laying around.  Pretty soon the tree tops were done, and I was paper piecing the tree trunks.  I looked through my stash to find some kind of contrasting fabrics for the sashing and setting triangles, but couldn’t find any thing to match.  Luckily I was able to get more Bonnie and Camille fabric, it wasn’t from the same line, but they tend to use the same color ways and tints/hues.  My version is a bit smaller than Bonnies, I only had enough to make 18 blocks, hers is 25.  It used up most of the scraps, I probably have about 20 little squares left, and I had to supplement about a yard and a half of new fabric, so I didn’t make much of a dent in the stash.  It’s controlled scrappy :).

The second scrap project this past week was the baby quilt top on the right.  The one on the left is a Jolly Bar pattern from the Fat Quarter shop called “Egg Hunt”.  I cut the scraps into 3 ½” squares, sewed them into four patch blocks and then cut 1 5/6″ strips off the side and then bottom.  When I sewed them back together I got the cute square surrounded, sort of a disappearing nine patch approach.  Set on point with a bit of baby pink Moda Bella, surrounded with the rest of the scraps and a outer border of more pink.  The fabric line is Lollipop Garden by Lella Boutique Fabric.

I worked on part four of the Scrap Dance Minuet Quilt at From my Carolina Home  This has been a low key sort of project, I’m making the twin size version.  Clues are released on the second Friday of the month, I have about a month to complete the step, usually takes about an hour.  I’m using stash fabric that I got on sale a few years ago, so its also a controlled scrappy project.

On the frame today is the 1930’s scrappy top I made last year.   Wow, that was a shock, I didn’t realize it had been a year until I looked at the picture date.  This quilt was an attempt to use up the scraps from my 1930’s Farmers Wife quilt.  Still plenty of that stuff in a bin.  Going to be a rainy next couple of days, there will be quilting on my schedule, especially since I just stocked up on back fabric. 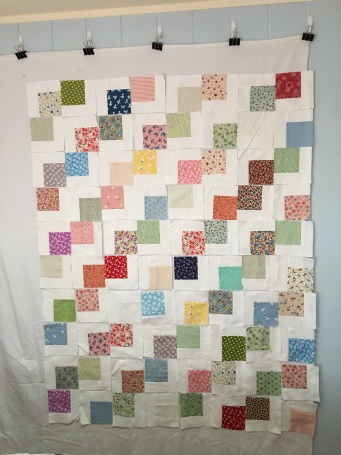 Linking up with Sarah for “Can I Get a Whoop Whoop?” Friday.  Hope you are inspired to create something too.

One thought on “Mrs. Krabappel”