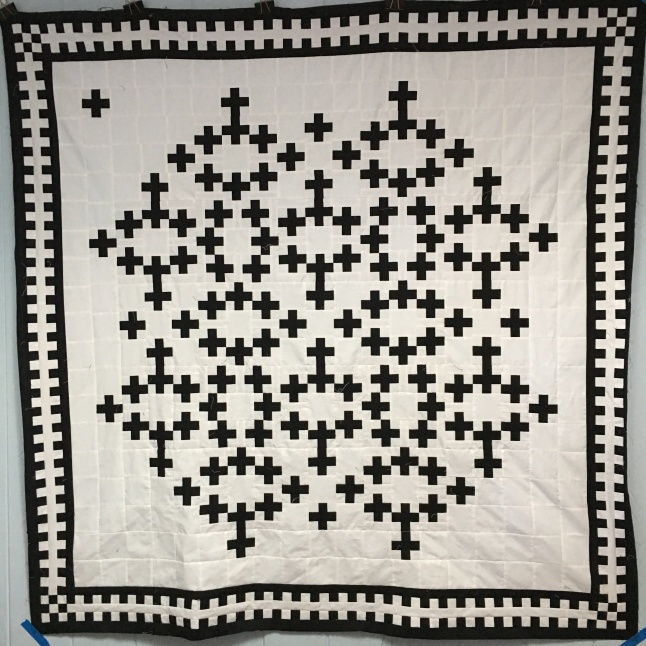 The top is done. I think I have about a thousand more loose threads to clip off the back.  I used the two rolls of 1 ½ inch wide Kona cotton, about two yards of Kona white and 1/4 yard of Kona black.  The white I had to purchase, but everything else was in my closet.  The jack part of the title is due to the ripping that was involved, mostly with the borders. Forget measure twice cut once, it should be measure twice sew once.  I didn’t measure the first inner black borders, which was fine for the first three sides.  Every thing was going swimmingly, until that last square that should have been black, but was white.  That side had ‘grown’ an 1 ½”, so there was un-sewing and much pinning and sewing.  It all worked out in the end :). I need to figure out a quilting plan for this one.

I received the first installment of the Mrs. Millers Apprentice block of the month.  These blocks are small, 6 inches finished, and the 2 inch square four patches are to go around the center piece later in the making. I like the lay out of this quilt, its on point with sort of a medallion in the center.

The pattern has an interesting way to make the cats cradle blocks, using the Easy Angle.  Strangely, it doesn’t use the EA for any of the other triangles in the quilt.  As you can see in the above quilt there are many, I will be using it for all of them.

This past weekend I made some progress on the Forest floor quilt, I’m about ½ way done.  The quilting motifs are pretty intense, but I am getting better at placing them with the software and stitching them out where they should be.  I took that quilt off the frame to do a quick pantograph on a baby quilt.  Finished that quilt up during the big game (no interest from me) and now I need to put the Forest back on the frame.  It’s quite large, 108 square I think.  Here is a photo, but it doest really show the quilting much, my next post will. 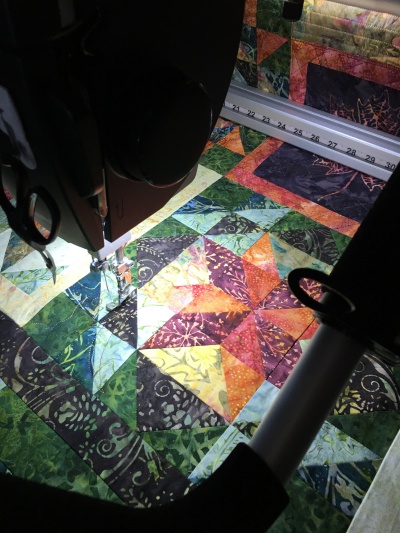 Linking up with Judy at Small Quilts and Doll Quilts for Design Wall Monday today, a day late.