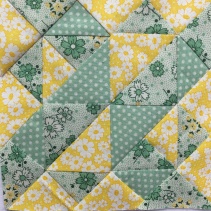 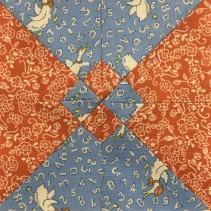 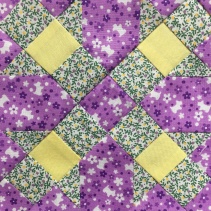 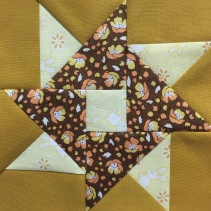 This past week was a catch-up week.  Between my machine getting a tune up and a short family vacation, the Farmer’s Wife blocks got sidelined.  Thankfully they were not that complicated to put together.  The first one above, Grandma, took the longest, as I kept mixing up the greens.  The  last, Iris, had some weird angles and I ended up using a larger than necessary piece to cover the spot.  A bit frustrating to sew the piece on to the foundation paper, flip it over and it doesn’t cover the spot, by the third retry of the same piece, I was voicing my protests aloud.

Recently a friend of mine was looking at my collection (44 blocks now) and commented that she didn’t particularly care for these blocks.  Something about the colors and fabric choices not being her style/preference.  “To each her own” I said, and went into the story of how each block has a name and a letter to the Farmer’s Wife magazine associated with it and how people from all over the world are also doing these blocks and sharing them.  She was still non-plussed, but when I told her they were only six inches square she had a new appreciation for them.  I don’t think they would appeal as much to me in a twelve inch block size.  The 1930’s prints are cute, but I don’t think the cuteness extends over large swaths of yardage.  Imagine a bedspread of tiny scotties and flowers on a purple background.  This Monday I will hit the half way point with these blocks and I’m thinking of starting to put them together with the sashing into rows.

This week I also want to get the majority of the sashing strips (72) for the “Rubies, Diamonds and Garnets too” quilt top done.  They are 12 inch long strips with 24 HSTs sewn to the outer edges.  That’s where the 1700 – 1 ½” HSTs go.  I have about 600 more to make.  I think that these could have been started earlier in this BOM instead of waiting for the last step.  Maybe doing eighty or so a month over the two year run.  Going to give my machine a work-out this week, she’s all tuned up and ready to go.

I received the next installment of “Gravity”yesterday, such a fun quilt to make.  Lots of long-arm quilting possibilities for this one.

I’m linking up with Sarah at Confessions of a Fabric Addict for Can I get a Whoop Whoop today.  Thanks for reading!